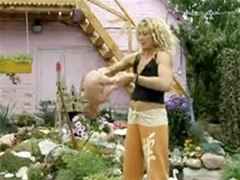 What's a yoga master do when she gets pregnant and has a baby?  Teach it yoga, of course.  This brings a whole new meaning to beautiful bouncing baby.

[skip down for the actual baby yoga tutorials]

Lena Fokina believes yoga for babies can help children be better prepared for life, as well as become more flexible.  But this isn't yoga like you're thinking.  Her baby-swinging toga techniques seems more like tortuous, even torturous, training for future flying trapeze circus performers.

But really, your newborn could be likened to a piece of meat.  I'm picturing a sushi chef flipping a fish carcass over and over as he slices and dices.  I'm just wondering when the flambé part comes in.  Maybe that's what happens when parents teacher their toddlers the art of poi?  But maybe there's no comparison.  Maybe it's just me who thinks this.

Form your own opinion:

The baby yoga video below went viral when many viewers were convinced that Lena Fokina was using a fake child. New source claim that the child is real and Fokina is very serious about her technique.

Baby yoga users claim that it's uses are innumerable. Their children could reportedly learn to walk and swim earlier. That their babies were fearless. Although no studies have concluded that the baby-swinging harms or helps children.

'The child was born in the Black Sea region. Her name is Platona, and she was two weeks old when we took that video. We have a lot of children like her here. They are early readers, singers, talkers, swimmers. You haven't seen anything like it anywhere!! And there's swimming with dolphins, scuba diving with them,' Fokina explained.  [via Terra]

But I'm not convinced that Fokina's version of baby yoga is as safe and useful as she claims.  After all, this is the same lady who does cat yoga.

Okay, that wasn't really Lena Fokina.  But it wouldn't surprise me if it were.

But if you think that baby yoga could be helpful for your child in the future, then you're probably right.  It doesn't look very complicated, if you want to go the swinging baby route.  No need for a tutorial on that.  You just need to browse the web to make sure you're not going to rip an arm off.  However, you may not be willing to go to the extremes that Fokina has.  Especially if you've got slippery fingers.

So, check out the below video tutorials on a different approach to baby yoga.  A safer version for the worrisome.  Do you really need to be one of those parents who drops their baby on its head?  Try explaining that one when they're all grown up.

Baby and Me Yoga

Want to master Microsoft Excel and take your work-from-home job prospects to the next level? Jump-start your career with our Premium A-to-Z Microsoft Excel Training Bundle from the new Gadget Hacks Shop and get lifetime access to more than 40 hours of Basic to Advanced instruction on functions, formula, tools, and more.

Other worthwhile deals to check out:

Join the Next Reality AR Community

Get the latest in AR — delivered straight to your inbox.

I'll be honest, I looked at these just to see whether any one of them drops their baby...

Anyone have the number for child protective services?

I feel enraged seeing mothers do this. Their joints and bones are still developing, why on earth would you apply strain on them like that? God people are stupid.

I don't understand why people would risk the lives of a child for their own gain? What has yoga come to. What if someone messes up? That'll be a wake-up call for sure.